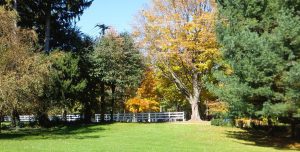 Weymouth Cemetery, located on Remsen Road in Weymouth village, has 277 historic graves with 177 markers. Weymouth’s first burials from 1819 to 1835 were at the “The Point”, an Indian burial ground overlooking the Rocky River. There were still gravestones there in 1881. Later, the graves were moved to other cemeteries in the township.

The oldest graves in Weymouth Cemetery are from the 1820s and the latest is from 1953. After that, the plat map was lost and no one can be buried here any longer. The graves include settlers born in the 1700’s, soldiers from the Revolutionary War and War of 1812, the township’s first schoolteacher, and other interesting people. There is a self-guiding brochure at the entrance. The gravestones were cleaned and restored by the WPS and the township in 2013 and can be found on Find-a-Grave. 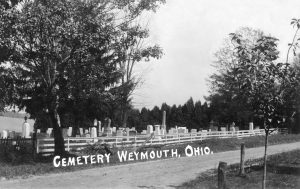 Weymouth Cemetery about 1896. The wooden fence had nibbles from the horses that were tied there during burials or visits to the cemetery. The last board fence was installed in 1930, after that a barberry hedge was planted until the current fence in 2014. The tall yew trees behind the obelisk were planted as a hedge in 1874 and still stand. 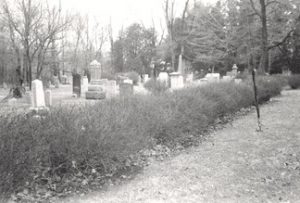 This cemetery was originally a private burial ground for the Heacox family who lived just east of the cemetery. Some Heacox graves are located near the cemetery entrance. Heman Heacox died Dec 17, 1836 age 38 years. “My savior has called from the world away to dwell in the mansion of eternal day”. Heman N Heacox son of H & SM Heacox died March 18, 1853 aged 19 years: “Farewell my friends I must be gone I can no longer stay you I now have done with all on earth Into my father’s face to view”. It later became the cemetery for the Weymouth Church. Cemeteries were seen as a park and students from the school often had lunch here. 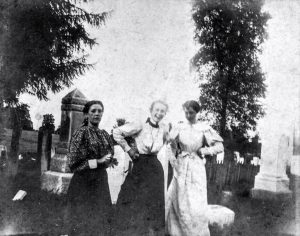 Olive Sedgwick, Susie Edwards and friend in the cemetery about 1896. 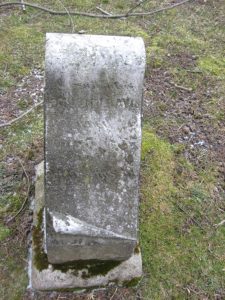 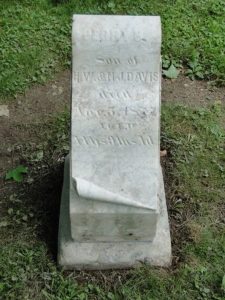 Perry Davis was the 11-year-old son of Weymouth innkeeper Hiram W Davis and his wife Mary. The stone was totally illegible before cleaning.

Edward Perkins came from Waterbury CT in 1833 and purchased a farm in Weymouth. Grandson Edward Smith Perkins, a teacher, lawyer and state representative, wrote in his diary that “we sent our household goods by water to Long Island Sound. From there they will be shipped by river to Albany and thence to Buffalo and by lake steamer to Cleveland. The most number of miles we can travel each day is 25 but we progress steadily”. Six generations of Perkins called the white frame house their home. In 1926 great-great-grandchildren Bessie Perkins, Morton O Perkins and Mrs Mary French lived in it. There were 50 relatives lived within 20 miles of the farm, although none remain today. The house was moved when route 71 was built in 1961. 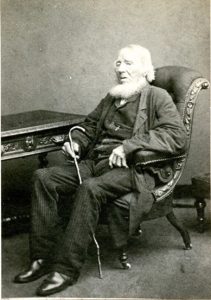 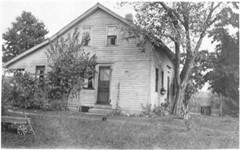 Eunice and Lemuel Graham were some of the earliest Weymouth settlers, arriving by horse & wagon in 1824. Lemuel served in the Vermont Militia during the Revolutionary War. They were married in Vermont in 1784 and had 13 children. He died July 31, 1844 aged 82; Eunice died Sept 8, 1848 aged 51. 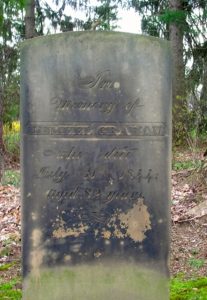 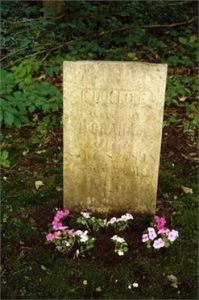 M(ary) Cresida McAlmont died March 2, 1849 age eight months. Her father John J was a Weymouth doctor 1846-1850 and graduate of the Western Reserve College in Cleveland. Later he was Professor of Materia Medica and Therapeutics in Arkansas Industrial University. He later went to Little Rock, Arkansas where he founded the of University of Arkansas Medical school and served as mayor. A street, neighboring town, and building at the school are named for him. He was the first surgeon to perform successful wiring of broken knee cap. 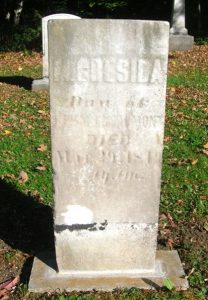 Flora Penfield At first, all we could make out was the name Flora, so it took some time to discover her. Flora was born in 1848 and died Sept 5, 1849 age 14 months. Her father Samuel Penfield who attended Oberlin Theological Seminary and was pastor of the Weymouth Church 1847-1850. 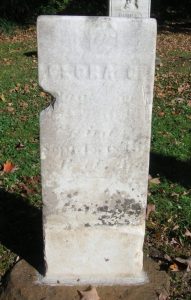 John Sayle was born in 1810 on the Isle of Man. The family sailed to Warrensville where his father John was a Wesleyan clergyman. Mona’s Relief Society in the Isle of Mann commented on his death: “Johnnie” Sayle’s familiar face and genial laugh has been missed for many years.” A store in Weymouth was built by Lathrop Seymour and JP Doan “in a very early day and operated by a man named Sale for a few years until he died”. He died in 1841, age 31. “All you that come my grave to view, Think I lived once on earth like you. Do not delay repent in time, For I was taken in my prime.”

Rev Roger Searle was a missionary from Connecticut who founded St Paul’s Episcopal Church, the oldest organized congregation in the county, in Weymouth in March, 1817. He subsequently founded other Episcopal churches throughout Ohio. His daughter Cecelia continued to live in Weymouth until her death February 16, 1835, age 23.

Amos B and Eugene Alcott were sons of Addison and Almira Alcott who were the Aunt and Uncle of famed author Louisa May Alcott.

John Wooster died July 18, 1853, aged 76. His gravestone was made by AG Tousley whose shop was on South Court in Medina. “KSHTWSST” in a circle is a Masonic symbol. Medina Masons founded March 9, 1820.

Roland Hamblin, son of Mary Jane and David, died in 1859 at 3 months. Lambs signify the innocence of children. 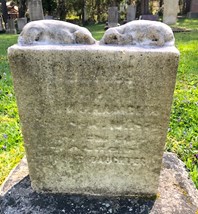 Selden Barnes Welton’s granite obelisk. He arrived in 1818, logged off 5 acres where the Weymouth Church is now, and “sowed them to wheat.” He died in 1881 at age 86 of “gradual wearing out of the fabric of life”. 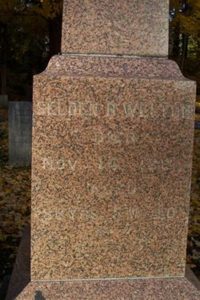 Wainwright and township trustee James Palmer built a cabin on lot 16 in Bagdad in 1816, then went back to Connecticut to collect his wife Susan and children. Susan Palmer emigrated to Weymouth with her brother from Connecticut in 1819. She had finest nursery in Ohio in Weymouth. She died Sept 1, 1858 of consumption.

Joseph Packard (1835-1867) served in the Civil War in Company D, Ohio 6th cavalry. He married Amelia Pierce of Weymouth in 1863. He was wounded and battlefield surgery left him bedridden. The wound never healed. Joseph was unable to even turn himself in his bed, requiring constant attention and care. After three subsequent surgeries, his leg was removed at the hip in 1867 but he died three days later Jan 7, 1867 aged 31. 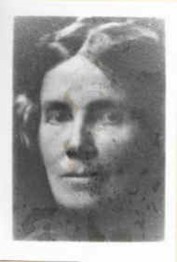 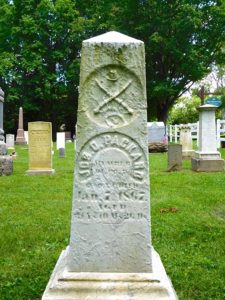 Eliza Northrop Barnes was born Oct 1798 in Connecticut to Joseph and Charity Northrop. In the summer of 1817, she taught the first school in Medina Township in the log cabin built for an Episcopal church. She had 24 pupils form eight families. She married Giles Barnes March 22, 1818 in the first wedding in the township in the same log building. They lived on Church Street and had nine children. Eliza Northrop Elementary School, which opened in the fall of 2009, is named for her. She died in 1863. 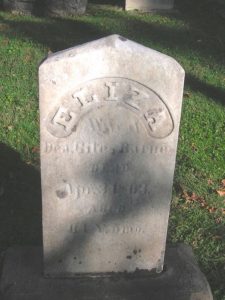 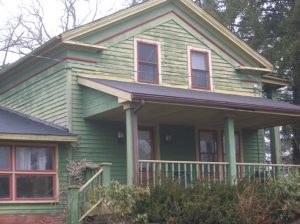 This stone was lying in the trees at the edge of the cemetery. After we discovered who he was related to, we were able to restore the stone and place it near his family. Mark Burdoin (1814-1850) was born in Canada. He was in Weymouth by 1835. In 1846 he was the miller at Jarod Stiles’ flour mill in Weymouth; he owned saw and grist mills by 1850. His widow Laura married Weymouth minister John L. Seymour, also buried at Weymouth. 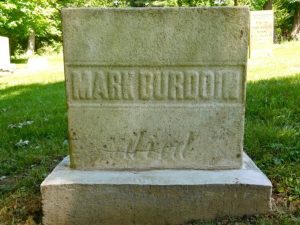 John Adams Potter served as township trustee and was 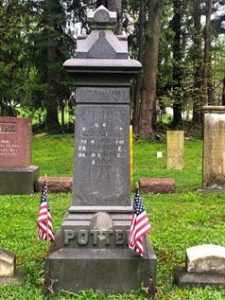 Noah Miles BRONSON was born in 1767 in Waterbury, Connecticut to Amos and Anna (Blakesley) Bronson. The family arrived in Medina Township in 1817, settling near the Grangerburg line. He became a very successful farmer with his son Hiram. They were among the first to take produce to the Cleveland markets. “With a team of oxen flour was hauled in, and salt brought back, the trip taking four or five days. Mr. Bronson, with his neighbor Lewis Nettleton, also drove cattle in to the Cleveland stock yards”. In the altar of St. Paul’s Episcopal Church Medina, a beautiful large stained glass window bears the names Noah and relatives Betsey, Sherman, Rebecca, and Lavinia Bronson. He died Sept 8, 1859. 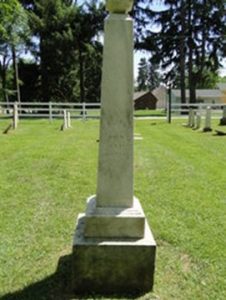 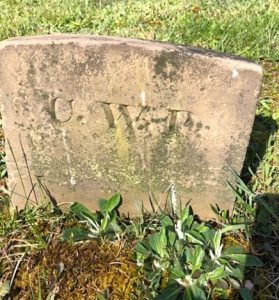 Jacob Welton was born in 1796 in Connecticut. He fought in the War of 1812 under his uncle, Col Hoadley. In 1817 he came to Weymouth While making a survey, he shot his first deer. While on guard duty one night, “he shot and killed an Indian who was trying to sneak into camp covered with a bear skin, and whom he had mistaken for a brute”. During the first winter he cleared three acres of timber, where the Weymouth store is now. He made frequent trips to Middlebury (now East Akron) with an ox team to get wheat and corn ground. As far as Coddingville he had to pick out his way by glazed trees. He hauled stone for the county courthouse. He and Austin Badger cleared the square. He participated in the great Hinckley hunt of 1818, killing six deer. In the fall of 1822, he and wife Huldah settled on a farm at the southwest corner of what is now Granger Road and I71. He continued to farm and also worked for the Beeline Railroad, clearing the part that was to run through the Indian Point in Weymouth. 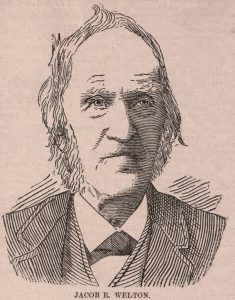 Zachary and Martha Deane Zachary was born in 1806 in England. He was an engineer who immigrated to the US in 1835. In 1850 he was listed as a mill wright, with real estate value of $4000. “The mill processed 650 logs in 1950, with value $650, producing 200,000 feet of lumber with value $2000. His mill employed an average of two monthly workers with monthly salary of $40”. Dean served as the County Surveyor from 1850 – 1857. His wife died in 1860 of dropsy. Her stone at Weymouth Cemetery is inscribed, by J. Cobrunn of Medina, “And I heard a voice from heaven saying unto me Write, blessed are the dead which dieth the Lord for hereafter: yea, saith the spirit, that they may rest from your labours; and their works do follow them”. He died months later. His will bequeathed his properties, together with the household furniture, books, horses, carriages, produce, silver plate, tools of all kinds, livestock, surveying instruments, to his three adopted daughters. An English newspaper reported on October 27, 1860: “at Weymouth, Ohio, North America, deeply regretted by a large circle of friends, age 53, Mr. Zachary Deane, eldest son of the late Mr. George Deane, of Henley on Thames”.